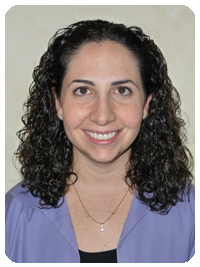 Dr. Cheryl B. Golden grew up in Colum­bus where she grad­uated as valedic­torian from Bexley High School. She attended The Ohio State University for both her undergraduate and dental education, and graduated Summa Cum Laude from The OSU College of Dentistry in 2001 with her Doctor of Dental Surgery degree (DDS). During dental school Dr. Golden was one of 20 dental students nationwide selected for a research internship at the National Institute of Health (NIH). She then completed a three-year orthodontic residency at the University of Southern California in Los Angeles where she received her orthodontic certification as well as a Master's degree (MS) in craniofacial biology. While at USC, Dr. Golden conducted research that was published in the September 2004 Journal of Clinical Orthodontics.

In addition to treating adolescents, Dr. Golden enjoys working with both adult and pediatric patients, sequencing treatment using an interdisciplinary approach, maximizing esthetic outcomes, as well as caring for patients with craniofacial anomalies and those with special needs.

Dr. Golden enjoys SCUBA diving, water and snow skiing, traveling, and most importantly spending time with her family. Dr. Golden met her husband, Rick, a pediatric ophthalmologist at Nationwide Children’s Hospital, while she was in dental school at Ohio State. They were married in Columbus in 2004, and they have two daughters, Andrea and Erica.

Dr. Golden is an advocate for education in both the public and professional communities. She is often asked to speak at local schools, dental society meetings, and local study clubs. She is thrilled to be a part of these local communities, sharing the gift of a beautiful smile.